Detection of Disturbances in Natural Vegetation

Detection of Disturbances in Natural Vegetation

Disturbances of forests and natural vegetation occur naturally and are important for forest ecosystems. With changing climate these biotic (e.g. insect outbreak, fungi and nematode) and abiotic (e.g. windthrow and forest fires) calamities are occurring more frequently (Seidl et al., 2011, Seidl et al. 2014). This is a challenging task for forestry and natural resource management, since the disturbances cause ecological and economical loss (Hanewinkel et al, 2012). However, only incomplete information is available about the location and intensity of the affected areas, in particular for actors overseeing very large areas.

The objective of this activity is to demonstrate a novel approach to detect disturbances in natural vegetation focussing on disturbances in forested areas of Europe (e.g., caused by forest clearing, windthrow, pathogens and fires) using change-detection analysis of multi-sensor temporal series of EO data.

Proba-V MEP provides a very flexible environment with easy and fast access to the full Proba-V S5 time series and additional input data (e.g. MODIS climatologies) can be uploaded via SSH. Different regions of interest and long time series can be easily processed by parallelizing which makes the Proba-V MEP VM particularly well suitable for testing algorithms but also for operational processing. With the given capacity of the Proba-V MEP VM (RAM, cores, storage), the processing could be easily extended to other and larger regions of interest.

To enable the use of 100 m Proba-V data, the combination of Normalized Difference Vegetation Index (NDVI) data from two sources was needed:

The idea is to leverage on the one hand, the length of the available time series from MODIS (starts in 2002) and, on the other hand, use the higher spatial resolution of Proba-V with up to 100 m pixel size. This resolution is significantly better than the 250 m (nominal) of MODIS and probably better adopted to the size of many disturbances occurring in Europe.

Two regions of interest (ROI) have been identified as use cases to demonstrate the effectiveness of this activity:

The tool is implemented on a virtual machine (VM) on the Proba-V MEP which is easily accessible using the X2Go Client. The activity is relying on open source software. All processes are implemented in the R programming language including associated libraries. RStudio has been used for code development and debugging. Input and output data were displayed in QGIS. Since January 2018, disturbance products are operationally processed for every Monday.

At the same time, the VM provides an easy and fast access to the full Proba-V S5 time series. Additional input data (e.g. MODIS climatologies) have been transferred via SSH.

Different regions of interest and long time series can be easily processed by parallelizing.

A first validation of the software has been done for the disturbance events in Germany 2015 and Sweden 2014 in hindcasting mode. An equal number of reference points falling into disturbed and undisturbed areas for both ROIs were defined by visually inspecting available spatially high-resolution images such as Microsoft Bing, Google Maps and Google Earth. 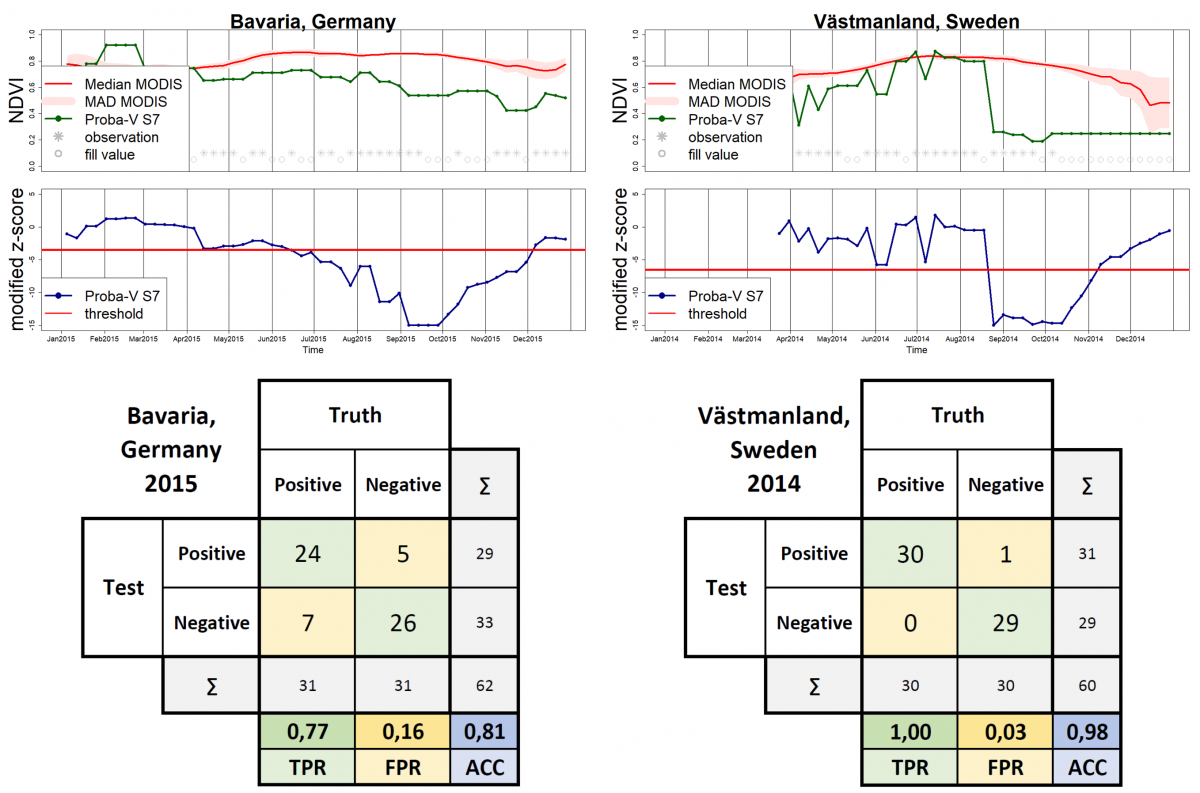 As a first step, the procedure can be applied to the whole of Austria providing disturbance products to large forest stakeholders such as ÖBF (Österreichische Bundesforste) in Austria.

A Jupyter notebook could be a good option to transparently describe the algorithms and the validation process for the scientific community.